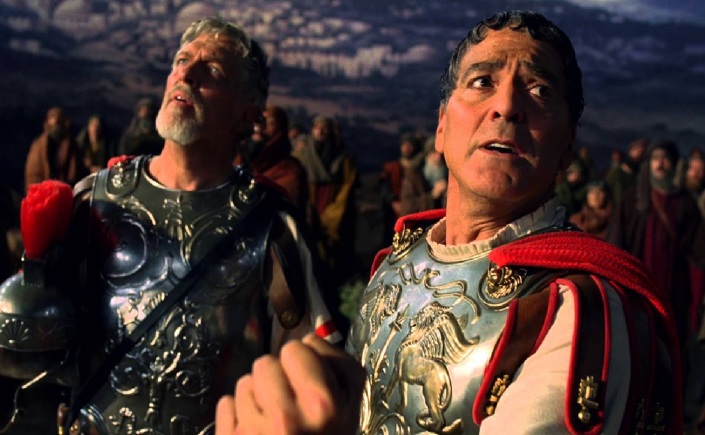 Hail, Caesar! is a lively homage to good ol’ Hollywood from two of cinema’s greatest writer/directors, Joel and Ethan Coen.

In 1951, Capitol Pictures head of production, and real-life figure, Eddie Mannix (Josh Brolin) is the studio’s ‘fixer’, keeping movie stars and director’s regrettable actions out of the spotlight. His life shifts from busy to chaotic after A-lister Baird Whitlock (George Clooney) is kidnapped from the set of blockbuster historical-epic Hail, Caesar! Facing pressure from the studio, frustrated filmmakers, and spoiled actors, Mannix has a few tricks up his sleeve to protect everyone’s interests.

Hail, Caesar! is the latest creation from two of Hollywood’s most talented and distinctive producer/writer/directors. Since their triumphant, film-festival favourite crime-thriller Blood Simple, Joel and Ethan Coen have turned heads for over 20 years with comedies, thrillers, remakes and westerns. The dedication to their craft is unparalleled; the duo has unearthed strange concepts and executed them with both style and substance. This comedy-caper fits tightly between the surreal thrills of The Big Lebowski and dramedy quarrels of Inside Llewyn Davis.

The Coen Brothers’ affection for Twentieth Century cinema is lathered onto every frame. Dabbling in a variety of genres and flourishes, the Coen’s latest is a brainstorming session writ large. Along with Mannix’s central, neo-noir plot-thread, the movie’s narrative splits off into several miniscule sub-plots and set pieces. The Coens revel in self-indulgence, convoluting a unique vision with an over-ambitious reach. Despite quality ingredients, the story never adds up to the sum of its parts.

Hail, Caesar! thrives whenever Mannix and his go-getter attitude are on screen. Mannix is a fascinating detective figure keeping the narrative in check (somewhat). Like every movie-within-a-movie flick, Hail, Caesar! comments on today’s ever-expanding, controversial studio system. Although its depiction of screenwriters and sexism remain resonant, its commentary on communism and the dividing line between art and industry are clumsily thrown in.

The performances are all captivating, with Brolin a charming screen presence throughout. Balancing comedy and drama, Brolin’s leading man goes toe-to-toe with everyone in the impressive cast that features Scarlett Johansson, Channing Tatum, Ralph Fiennes, Tilda Swinton and Coen bros staple Frances McDormand. Meanwhile, Clooney brings his self-deprecating, slapstick persona back from Intolerable Cruelty and O Brother, Where Art Thou?

Hail, Caesar! resembles the Coen Brothers on auto-pilot, fitting a cast of regulars into an over-the-top, pedantic homage to their industry. If anything, it proves cinematographer Roger Deakins is contemporary cinema’s most impressive workhorse.

Hail, Caesar! is available in Australian cinemas from February 25th